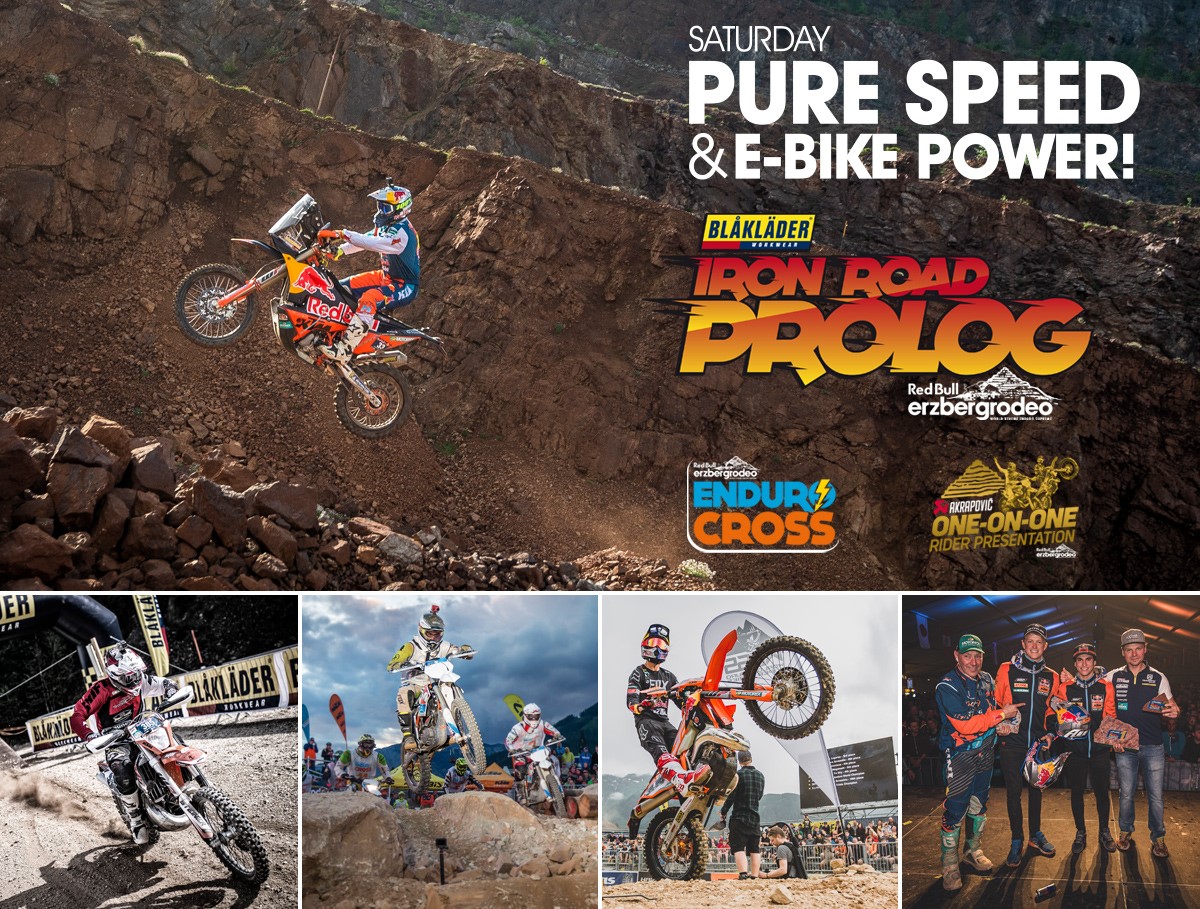 On Saturday 1500 Erzbergrodeo competitors take on the second and final heat of the BLAKLÄDER IRON ROAD PROLOGUE.The racing action get's even tougher on Saturday as each competitor will try to improve his riding time on the second heat and reach the Top-500 to be able to get an entry spot for the Red Bull Hare Scramble!

The blaklÄder iron road Prologue offers dramatic high-speed action of an own level. Riding skills, speed and the perfect choice of line through the many curves decide upon winning or losing. Almost anything resembling a motobike is entitled to compete in this race, assumed it is technically OK. Big bore Enduros, Scooters, Mopeds and even modified street bike are no rare sight at the start of the Erzbergrodeo's Prologue race.The rules are simple: each competitor has two attempt on the racetrack, one on Friday and Saturday each. Riders are released on the track in intervals of 20 seconds, and as soon as the checkers are lifted it's all about holding the throttle wide open until the finish line at the Erzberg's peak at 1466m above sea level. Top speeds of 190 km/h are no rarity on the bumped and gnarly gravel racetrack which winds alongside the main rider paddock up to the iron mountain's peak.After 2 days of racing, each riders fastest heat decides about his total ranking in the blakläder iron road Prologueand his start at the Red Bull Hare Scramble...!The blakläder iron road Prologue spectator areas offer an amazing sight on the gnarly racetrack and the massive high-speeds racing action. The spectator areas are in short walking distance from the Erzbergrodeo Arena.

Another action highlight on Saturday: the second qualifying and eventually the ERZBERGRODEO ENDUROCROSS Superfinals!Riders compete all on the same machinery - the full electric KTM Freeride E-XC! The race is held right inside the Erzbergrodeo Arena on a manmade Endurocross parcours featuring obstacles such as a 5m high wooden wallride! This format offers spectators a perfect view on the action conveniently from the grandstands!

In qualifying riders have to secure the fastest possible lap time to enter the 48-riders Superfinals on Saturday evening. The Superfinals offer fierce and tight racing action as the eventual winner will be awarded with nothing less than a first row starting spot for the Red Bull Hare Scramble!

Closer to the action and you'll need a helmet too! The 2-hours long ONE-ON-ONE rider presentation inside the Erzbergrodeo Arena offers an exclusive look at the world's elite motorcycle offroad riders. Erzbergrodeo presents top riders and talented rookies head to head on the Endurocross parcours in front of the Arena's grandstands. Event announcer Andi Brewi and Erzbergrodeo press/media manager Martin Kettner present each rider to the crowd. An unforgettable experience that no motorsports fan should miss!

Competitors, entourage, crew members and spectators gather at the legendary Erzbergrodeo Ottakringer beer tent on Saturday evening for the exciting Prologue winners ceremony! Erzbergrodeo Mastermind Karl Katoch presents the podium of each class of the Prologue before the 500 qualified starters of the Red Bull Hare Scramble are presented on the big video wall inside the beer tent!

After the official part of the evening is over, a crowd of thousands of riders, friends, visitors and crew start the biggest and maybe craziest party of the international offroad community! The Erzbergrodeo resident DJ will rock the beer tent until 4:00 in the morning...