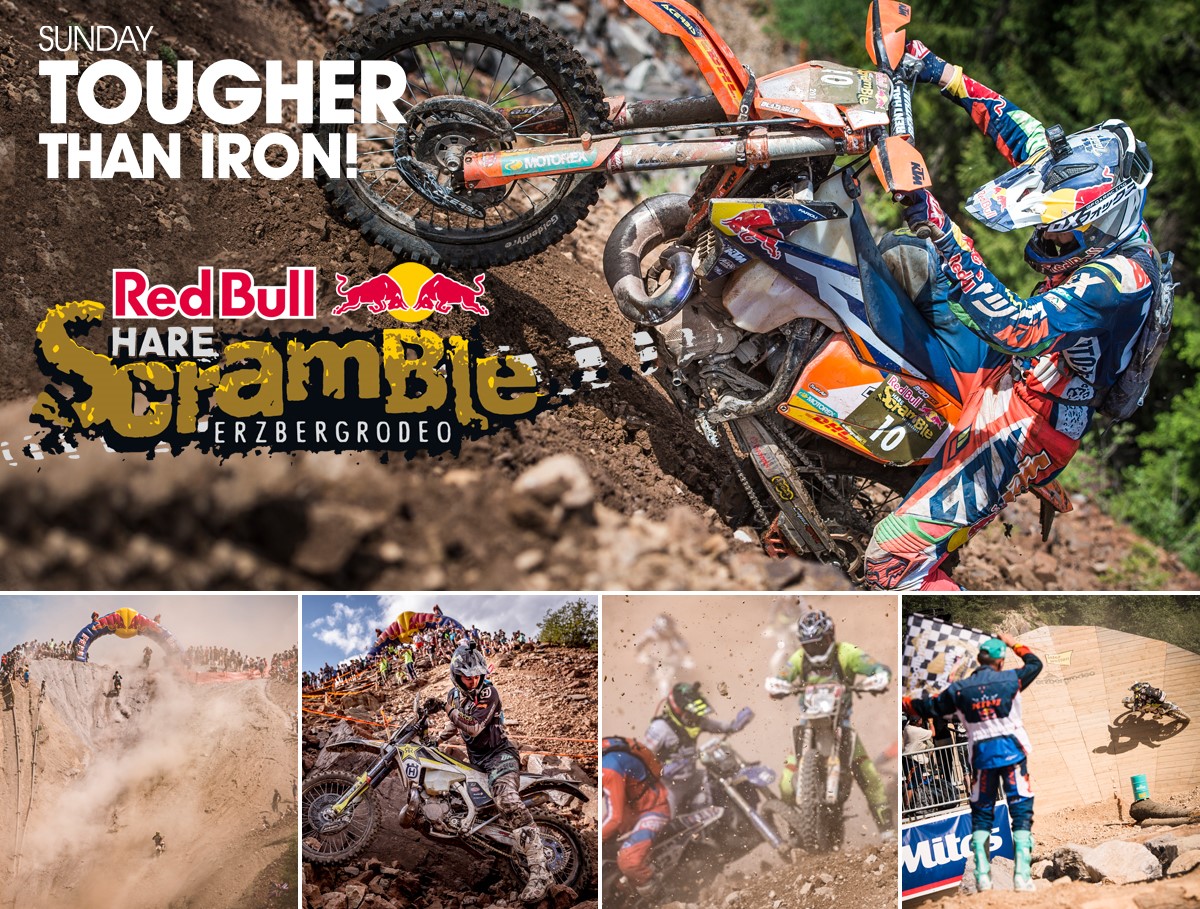 The Erzbergrodeo's last day of action serves all competitors and spectators nothing less than the true highlight and the world's most renowned Xtreme Enduro race: the RED BULL HARE SCRAMBLE! 1 mountain, 500 riders, 25 checkpoints and 4 hours time. Only the best of the best survive the world's toughest Xtreme Enduro and may add their names to the very distinguished list of finishers!

Spectators can expect 100% motorbike offroad action of the highest level! Even World Champions and Superstars have to bend their knees in front of the Iron Giant and have to go way beyond their limits to reach the finish at the Erzbergrodeo Arena.

The starting area is located at the lowest point of the Erzberg mining compound where the 500 competitors are lined up in rows of 50 riders each. Even the assembly of the starting grid is breathtaking as excitement and adrenaline fill the air above the riders.At 2:30 p.m. Karl Katoch raises the flag to start the race and unfolds the drama in front of tens of thousands of enthusiastic fans!

The RED BULL HARE SCRAMBLE spectator areas offer a close and breathtaking look at the competitors impressive riding skills and the inhuman challenges the track has to offer.

The RED BULL HARE SCRAMBLE spectator areas can be reached by short walking distance and by the free-of-charge Erzbergrodeo Shuttlebus routes SOUTH and NORTH.

Erzbergrodeo Shuttlebus-Route SOUTH
The SOUTH route leads from the impressive Red Bull Hare Scramble starting area to parts of the racetrack which will be handled by most of the starting field. The spectator areas SOUTH offer a view on large groups of riders tackling the selective track, heavy carnage and lots of action. The Erzbergrodeo Service-Crew is on hand at each bus station to provide informations about the Red Bull Hare Scramble.

IMPORTANT NOTE: please do not leave the indicated spectator areas and respect the restricted zones!

Spectator area ARENA SOUTH
The spectator area ARENA SOUTH is located within 5 minutes walking distance from the Erzbergrodeo Arena and offers a spectacular view on the massively steep uphill sections riders got familiar with at the Mitas Rocket Ride. While the top riders fight for each position, a lot of competitors will need more than one attempt to clear this section. A spectator area offering a high degree of action as well as cool drinks and delicious snacks

Spectator area START
The spectator area START is located within 10 minutes walking distance from the Erzbergrodeo Arena and offers a spectacular view on the starting area and the very first uphill sections - which already seperate the men from the boys after a couple of minutes race time. Row after row will hit these uphills like waves of adrenaline to provide unseen drama and action! It is also the starting point of all Shuttlebusses taking on the SOUTH route.

Spectator area BOHRERSCHMIEDE (Shuttlebus-Route SOUTH)
The spectator area BOHRERSCHMIEDE is located at a plateau above the starting basin. Spectators can watch the riders going over uphill sections full of massive rocks and further towards the WASSERLEITUNG. Riders will fight for a position at the top of the field before the race heads into the tight and technical sections of the race.

Spectator area BADEWANNE (Shuttlebus-Route SOUTH)
The spectator area BADEWANNE is located at the side of a huge ore washing basin which is called the "giant bathtub". Competitors have to handle the close to vertical descent to the bottom of the basin before they have to exit the BADEWANNE over the very steep side of the basin. Right after the basin riders head towards the Checkpoint "Zumpferlwald" - a very technical forest that offers loads of action. Food and beverage service is available.